The Kirameki CD was released in for LaLa's September 2005 issue, which marked LaLa's 29th Anniversary. The CD has been released in Japanese only.

Comedy about a photo taking session of Kaname by Zero, where Yuki steals one of the images that Kaien is treasuring. In punishment, Kaname makes Yuki and Zero look through photos with him while giving them a hard time. They find a pantyshot image of Yuki. Yuki suspects the chairman is the culprit and runs off leaving the incriminiating photo behind. Kaname leaves the image to Zero who implies that he may have been the real photo taker having witnessed the original scene. Zero grumbles about troublemakers. 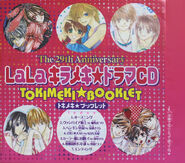 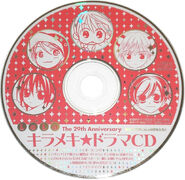 Disc
Add a photo to this gallery

Retrieved from "https://vampireknight.fandom.com/wiki/LaLa_Kirameki_CD?oldid=60019"
Community content is available under CC-BY-SA unless otherwise noted.