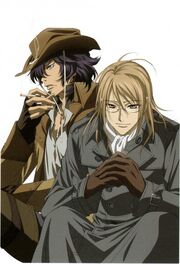 Vampire Hunters ( ヴァンパイア ハンター , Banpaia Hantā) are born as gifted humans, who possess the power to destroy vampires. Their powers are passed down through their family's generations.

It is believed that the original vampire hunters ate a vampire to gain their powers. It is revealed that their power was bestowed upon them after the Hooded Woman gave them a high dosage of her blood to near poisoning levels. Those that survived became vampire hunters. She then threw her heart into the fire creating the first vampire weapons. Following his discovery of her actions, Kaname charged them to the last man to kill all the vampires who believed themselves unkillable.

This has also created a curse on vampire hunters. They can never have twins because the twins will consume each other in the womb and will be stillborn. In rare cases, the stronger twin will consume the other in the womb and be born as a very strong vampire hunter. Twin birth is extremely rare, and while one twin will be very strong, the other will generally be sickly and weak, and will serve little use as a hunter. For the pair to become powerful hunters, the stronger one has to devour the other and become one. The vampire hunter twins are known as 'The Cursed Twins'. The only known hunter twins, who have appeared in both the anime and manga, are Zero and Ichiru Kiryu.

Vampire Hunters have the power to sense vampires, have slightly accelerated healing, and can even perform some magical spells. Vampire hunters are able to wield Anti-vampire Weapons. These qualities make a hunter much stronger than that of the average human. Some vampire hunters are known to live past the expected age of an average human due to the amount of vampire blood in their veins. An example of this is Kaien Cross.

Vampire hunters generally have an antagonistic attitude toward vampires, generally due to the danger posed by them and the damage they have done. Many hunters express the opinion that vampires enjoy killing too much, thus the reason why they don't think vampires should police their own.

Vampire hunters see it as their duty to kill rogue and dangerous vampires and consider themselves a type of policing force for them and do not appreciate vampires interfering. Recently , some hunters have started to see vampire hunting as more of a sport under the rule of the former president.

Retrieved from "https://vampireknight.fandom.com/wiki/Vampire_Hunter?oldid=64428"
Community content is available under CC-BY-SA unless otherwise noted.