Vampire Knight Musical (ヴァンパイア騎士ミュージカル, vanpaia naito myuujikaru) is a musical stage play adaptation of the Vampire Knight manga series. It premiered in January 2015, and it had a second run in July 2015 under the name Vampire Knight - Revive (ヴァンパイア騎士-Revive-).[1]

The musical was first announced on September 24, 2014 with an ad in LaLa, the magazine which had previously serialized the manga.[2] LaLa also released cast announcements in their next issue in December 2014, and printed several interviews related to the musical.

A recording of one of the first run performances was released on DVD on May 29, 2015.

The show first ran in January 21st to 25th, 2015 at Hakuhinkan Theater in Tokyo, Japan. The last few performances were sold out.

The show had a second run from July 1st to 5th, 2015 in the Owlspot Theater at the Toshima Ward Performing Arts Center in Tokyo, Japan. Eight shows were performed. Most of the original cast returned for the second production.

The story follows the original Vampire Knight plot up through Shizuka Hio's death, condensed to just under two hours.

Two theme songs were released for the Musical: 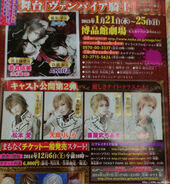 Preview in LaLa[4]
Add a photo to this gallery

Vampire Knight Revive trailer
Add a photo to this gallery

Retrieved from "https://vampireknight.fandom.com/wiki/Vampire_Knight_Musical?oldid=58647"
Community content is available under CC-BY-SA unless otherwise noted.